The Immigrant Jewish Experience in America 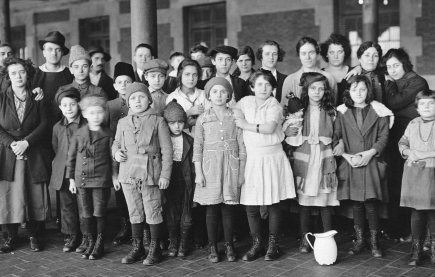 The Immigrant Jewish Experience in America

Shtetl to ghetto and beyond
The Immigrant Jewish Experience in America

Three million Jews migrated to the United States from the 1820s to1920s, giving rise to one of the largest Jewish communities in the world. Although that number dwindled after restrictive immigration laws hit the books early in the 20th century, Jewish (and other) immigrants continued to come—some legally, some not.

Today, America is home to Jews from around the world. Join historian Dr. Tony Michels to explore the odyssey of American Jews through the immigrant experience. Explore such questions as: Why did Jews come to the U.S. in such large numbers? What challenges and barriers confronted them? How did America shape the Jews who came—and how did they, in turn, shape America?

Dr. Tony Michels is the George L. Mosse Professor of American Jewish History at University of Wisconsin-Madison and Director of UW’s Center for Jewish Studies. He specializes in American Jewish history, Russian Jewish history, Yiddish culture, and the history of the working class. He is the author of A Fire in Their Hearts: Yiddish Socialists in New York and co-editor of The Cambridge History of Judaism: The Modern Age. He received his PhD and MA from Stanford University and BA from University of California.

This is the 2019 Horwitz Family Program in Jewish History, generously endowed by the Horwitz Charitable Fund.

View an electronic copy of the current Spertus Calendar of Events.  MORE >