Drawing Jewish Teens Back to Life

Drawing Jewish Teens Back to Life 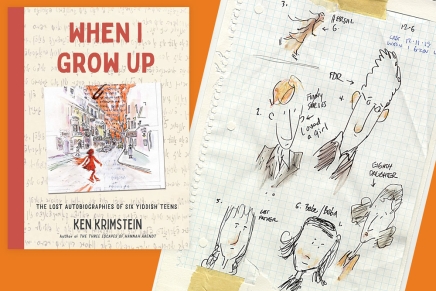 Spertus Institute is excited to share the latest project of New Yorker cartoonist Ken Krimstein. Join us for a live online talk on June 13, 2022.

Several years ago, I had the opportunity to work with writer and cartoonist Ken Krimstein, an Evanston native whose cartoons—wry observations on the eccentricities of daily life—run in The New Yorker. In my role at Spertus Institute, I worked with Krimstein as we presented an exhibition of the drawings for his acclaimed graphic biography of Hannah Arendt.

In the middle of our work together, he left on a mysterious trip to Vilnius. What was he doing there?

I’ll let Krimstein tell you in the words that open his mesmerizing new book, When I Grow Up: The Lost Autobiographies of Six Yiddish Teenagers. He says: “In the late summer of 2018, I held a miracle in my hands.”

What he held was a student notebook, which he said looked as crisp as if it had been written that afternoon. But it hadn’t. In fact, its 80-year journey was a story almost as riveting as the words within. Krimstein asked the archivist assisting him at the Martynas Mažvydas National Library of Lithuania, “how many people have flipped through this notebook since 1939?”

The notebook was one of 700 entries received by the YIVO Institute for Jewish Research in Vilna (Vilnius) in response to a memoir-writing contest they held for Yiddish-speaking teens. The monetary award for the best of the essays was substantial, but it was never given out. The prize was to be awarded on September 1, 1939; the day Hitler invaded Poland.

Long thought lost to the Nazis, the teens’ essays were in fact heroically smuggled into hiding, to be rediscovered in 2017. In When I Grow Up, Krimstein illustrates six of the entries, drawing us (literally, in this case) into the teens’ passions, challenges, hopes, and dreams.

Krimstein says, “These were vibrant, complicated, candid, self-aware teenagers; unapologetic, ornery, and know-it-all like all teenagers everywhere; resolute young men and women with stories to tell.

The essays were submitted anonymously so the teens could be candid about their lives. In most cases, we don’t know who they were, so Krimstein needed to create visual identities for them. To give us a glimpse of the process, he shared this early sketch, in which you can see him working out the characteristics that made each teen unique. To represent their worlds, he walked the streets they had walked and immersed himself in the time they lived.

In a recent podcast interview with Krimstein, Spertus Director of Jewish Studies Dr. David Gottlieb described When I Grow Up as “taking us into the hearts and minds of teenagers on the precipice of World War II, in a Yiddish world that would soon be destroyed.” Krimstein sums up his work more succinctly. He calls himself a “graphic chronicler.” In this case, his chronicling brings lost lives back to life.

On June 13, join Spertus Institute for Voices: Rescued Stories Brought to Life, A Conversation with Ken Krimstein, which will be broadcast live for viewing online. Following the program, all registrants will receive a limited-time link to viewe the recorded program.

This program is free thanks to donor support. Reservations are required. Reserve your spot at spertus.edu.

Ken Krimstein is a cartoonist, author, and educator whose work appears in The New Yorker, The Wall Street Journal, Barron's, and the Chicago Tribune. His 2018 book The Three Escapes of Hannah Arendt won the Bernard J. Brommel Award for Biography and Memoir, was named a Best Graphic Novel of the Year by Forbes, and was a National Book Award finalist. When I Grow Up: The Lost Autobiographies of Six Yiddish Teenagers was named an NPR Best Book of the Year, a Washington Post Best Book of the Year, a Top Ten Graphic Novel of 2021, and a Chicago Tribune Best Read. Krimstein teaches at DePaul University and the School of the Art Institute of Chicago. He recently taught a special course on Jewish comics for Spertus Institute graduate students.

This article appears in print in the April 2022 issue of Jewish Chicago, The JUF Magazine. Ken Krimstein photo by Richard Shay.