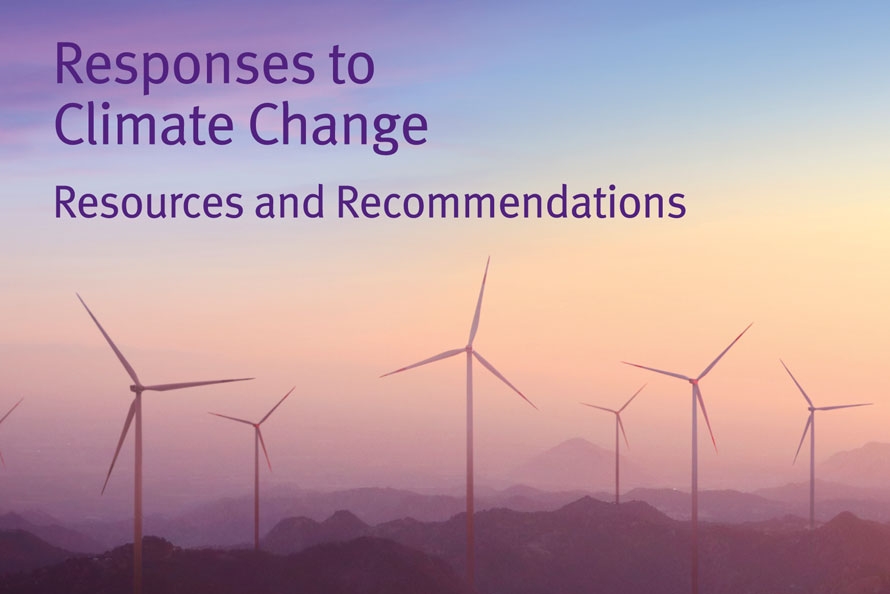 
Spertus Institute presented Responses to Climate Change as the 2020 installment of its acclaimed Critical Conversations series.

In February 2020, in the final days before the new Coronavirus disrupted our lives, nearly 400 people came together in Spertus Institute’s Feinberg Theater for Critical Conversations: Responses to Climate Change. The event featured an impressive panel of activists and experts who debated what needs to be done and how efforts could gain ground.

The event raised important issues that merited deeper consideration, so Spertus Institute planned and presented an online Think Tank on Religion and Environment, bringing together a group of committed thought leaders. Spertus President and CEO Dr. Dean P. Bell led discussions that included Critical Conversations panelist Karenna Gore, as well as David A. Barr of the Divinity School at the College at the University of Chicago, Spertus Faculty member Rachel Havrelock of the UIC Freshwater Lab, Michael Hogue of Meadville Lombard Theological School, Tom Jacobs of Krueck + Sexton Architects, Rabbi Rachel Mikva,of the InterReligious Institute at the Chicago Theological Seminary, Barbara R. Rossing, of the Lutheran School of Theology at Chicago, and Brian Sauder of Faith in Place. Their conversations will lay the groundwork for additional programs and initiatives in the coming year.

In the weeks since the event, climate change has continued to be a hot topic—even as news headlines have been dominated by the coronavirus pandemic.

“Humans are arguably the best problem-solving species that ever walked the Earth, behavioral scientists say. Give us a coronavirus and we’ll have a vaccine within the year. And in the meantime, we’ll stock up on disinfectant wipes, walk around in surgical masks and wash the heck out of our hands. But throw climate change at us and we’re curiously inert,” writes Patty Wetli in this piece for WTTW, which features quotes from several of the event speakers.

On the bright side, one—albeit woefully unintended—silver lining of the pandemic has been a dramatic improvement in pollution. From a resurgence in wildlife to skyrocketing air quality around the world, it seems that our ability to make rapid societal changes in the face of an urgent and readily apparent crisis like coronavirus has also helped boost our response to the less-apparent, but equally urgent crisis of climate change.

“Maybe our suddenly clearer skies don’t have to be temporary,” urges Matt Simon in a recent Wired article. “We’re getting a taste of how much more livable our cities would be if we designed them for people, not cars. Closing roads to cars altogether—as cities like Boston and Oakland, California, have done during the crisis—means people can walk and bike in safety, itself a boost to public health.”

It’s potentially a moment where we can get a clearer picture of what we’ve slowly kind of numbed ourselves to,” adds Northern Arizona University climate scientist Kevin Gurney.

From left: Vice President at Rare and head of the Center for Behavior & the Environment Kevin Green, behavioral economist Katherine Milkman, and author David Wallace Wells. Photo by Dogs and Not Dogs Photography.

The following resources—from our presenters and the Spertus Institute team—respond to topic areas addressed.

Consider this your invitation to learn more, take action, and keep this critical conversation going.

The Critical Conversations series is generously funded by the late Eric Joss.

350.org is an international movement working to end the age of fossil fuels and build a world of community-led renewable energy for all. Among its founders is Critical Conversations panelist Bill McKibben—whose 1989 book The End of Nature is often cited as the first book on global warming. The name represents the safe concentration of carbon dioxide in the atmosphere—350 parts per million. Today 350.org has chapters around the world. Its website offers a range of resources, including videos explaining climate science and tools for facilitators and trainers.

The Center for Earth Ethics seeks to enact a moral response to the threat that climate change poses to the world—especially to vulnerable communities. It focuses on areas including eco-ministry and environmental justice, as well as engaging with policymakers and society to establish a new development paradigm. It was founded by Critical Conversations panelist Karenna Gore, daughter of pioneering climate activist Al Gore and a graduate of Union Theological Seminary where the center is based.

Choiceology is a podcast that explores the lessons of behavioral economics, exposing the psychological traps that lead to mistakes. Hosted by Critical Conversations panelist Katy Milkman, each episode shares stories of irrational decision making and explores how we can learn to make smarter choices.

Jewish Earth Alliance is a grassroots network of partner organizations working together to enable Jews to engage in the environmental policy process, raising a voice for actions that reflect Jewish values. Among its founders is Critical Conversations panelist Mirele B. Goldsmith, an environmental psychologist and activist whose writings have been published in the Forward, Huffington Post, Jerusalem Report, and Jewish Week.

Rare is a global leader in catalyzing behavior change to achieve enduring conservation results. They specialize in bringing proven locally-led solutions to regional and national scale around the world. Critical Conversations panelist and Rare Vice President Kevin Green is a champion of behavior-centered design.

Hazon is the largest faith-based environmental organization in the U.S. It seeks to build a movement that strengthens Jewish life and contributes to a more environmentally sustainable world for all. Spertus Institute is proud to be a recipient of the Hazon Seal of Sustainability and to have them as a Critical Conversations 2020 community partner.

Architect's Advocate is spearheaded by Critical Conversations sponsor Krueck + Sexton Architects, who designed Spertus Institute's award-winning Silver LEED-certified building. Because the building sector accounts for nearly 40% of global greenhouse gas emissions, action in the design and construction industry can have a ripple effect in creating sustainable communities for all.

The Threat of Climate Change

In 2017, an essay by climate columnist and Critical Conversations moderator David Wallace-Wells appeared in New York magazine. Titled The Uninhabitable Earth, it ran with the rather bleak subtitle: "Famine, economic collapse, a sun that cooks us: What Climate change could wreak—sooner than you think." This widely read and debated cover story outlines the possible impacts of climate change—not just what it will do to the planet but how it will shape our politics, our culture, and our emotional lives. The article was the most highly read in New York magazine history and became the basis of the bestselling book by the same name, soon to be an HBO Max series. Read an annotated version of this article, complete with interviews with scientists and links to further reading. Read annotated essay, The Unihabitable Earth, 2017 >

350.org created this clear and concise explanation of the science of climate change. Climate science basics >

There are a wide range of impediments that keep us from responding to climate change—some are political, some communal, some personal. In this WLS-Radio interview, Chicago reporter Justin Kaufman talks with Critical Conversations panelist Kevin Green about why it's so hard to make changes and what we can do in our own lives to make a difference. Listen to the podcast, starting at :44 >

What role might religious and communal institutions have in affecting climate behavior? On this issue, Critical Conversations panelist Karenna Gore spoke with WTTW's Patty Wetli. Read the interview >

Panelist Mirele B. Goldsmith believes climate change activism is an imperative for the Jewish community. In this Times of Israel piece, she explains why. Climate change is the Jewish emergency you should be talking about >

Spertus President and CEO Dr. Dean P. Bell recommends the work of the Forum on Religion and Ecology at Yale, an international multireligious project that seeks to broaden understanding of current environmental concerns. Explore climate change statements from world religions >

Critical Conversations is an annual Spertus Institute program inspired by Judaism’s embrace of civil discourse. Every year, Spertus brings together high-profile speakers with different points of view to address a critical issue of the day.

The 2020 topic was Responses to Climate Change. The Critical Conversations series is generously funded by the late Eric Joss.

Spertus Institute for Jewish Learning and Leadership offers dynamic learning opportunities, rooted in Jewish wisdom and culture and open to all. Graduate programs and workshops train future leaders and engage individuals in exploration of Jewish life. Public programs—including films, speakers, seminars, and concerts—take place at the Institute's Michigan Avenue facility, in the Chicago suburbs, and online.

Spertus Institute is a partner with the Jewish United Fund in serving our community.